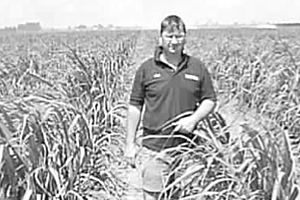 An article that first appeared in Acres Australia in 2006 about the importance of using organic fertilisers.

Nature is a whiz at cooking up its own recipes to aid ailments, fill bellies and continue the great circle of life. So it comes as no surprise that a natural compound is holding its own against its chemical counterpart in the soil fertiliser stakes - and saving the Great Barrier Reef as well.

Throw in coral, sea birds, fish and seaweed. Compress for thousands of years. And there you have it – one of the best sources of phosphorus, calcium, silica and cation exchange products in the world.

These natural fertilisers significantly reduce, by a massive 50 per cent, the run-off of nitrogen and phosphorus into the river systems and to the Great Barrier Reef. This run-off is a major environmental threat facing Australia.

After years of research and study of the ever-expanding growth of organic-based products and markets around the world, Guano Australia Pty Ltd’s CEO John Jashar identified and secured a long-term supply of Guano Gold 100% Natural Organic Phosphatic Fertiliser from Indonesia.

Guano Gold - Kwik Start was launched into the Australian horticultural, agricultural and turf marketplace in early 1994.

Both products have proven their value in a number of independent trials recently conducted on Queensland farms by proving that farmers can cut their urea fertiliser concentration by 50 per cent and still enjoy the same quality growth and yield. These trials replicated those conducted in recent years around the world.

“We value the support of the organic Biodynamic industry, all certification entities and in particular, the Biological Farmers of Australia,’’ Mr Jashar said. “We are great supporters of agronomists, farmers and distributors who are our customer base - and we have a team of agronomists working across Australia.”

Mr Jashar’s research and studies proved that worldwide demand for chemical-free, organic products was increasing - underpinning the future of sustainable agriculture. Further investigations revealed that the Australian marketplace had no regular, reliable supply of high quality organic phosphate, yet Reefsafe guano had long been successfully marketed in the sensitive Japanese market.

“For 13 years our company has grown at a rate of 20 per cent every year. We have survived the drought and are opening new distribution points all over Australia,’’ Mr Jashar said.

“We are not only dedicated to organic farmers - the bulk of our customers are conventional farmers heading down the organic track,” Mr Jashar said.

“We must address the issues of soil inputs and runoffs - and reduce the amount of nitrogen and phosphates running into our rivers and the Great Barrier Reef.

“It has been proven that Reefsafe Agrispon is an important tool in decreasing the use of urea by 50 per cent - that’s 50 per cent less not going to run-off into our rivers and the Barrier Reef. Our phosphate doesn’t leach or run away.”

“We have a number of plans in the pipeline - company expansion and linking up with a greater number of companies aligned to our way of thinking and promoting more sustainable farming,’’ he said.

“Farmers are now open to new products because they have been proven by independent trial data – they are no longer regarded as ‘snake oils’,” Mr Jashar said.

The Trials I N the past few years a number of independent trials testing the value of Reefsafe Guano fertiliser have been carried out in Bundaberg by locally-based Crop Tech Laboratories. The trials, on cane farms, were overseen by Crop Tech’s senior technical agronomist Robert Doyle. A similar trial with sweet potatoes was also conducted by P&H Rural Bundaberg.

“We conducted the study on four farms over one crop cycle only and at the end of the day it was certain that the Reefsafe trial blend cost the same amount, was less destructive to the environment but yielded a crop that was just as good - there is a longterm benefit,’’ Mr Doyle said.

“We used the Reefsafe Agrispon on three farms in small trials and proved that if you cut the nitrogen back 50 per cent (using Reefsafe Agrispon) you still achieved the same results as using an industry-standard NPK fertiliser.’’

The plantings were also randomised so as not to favour particular soils. The trials were scientifically conducted.

“The results showed no differences at all between the four trial patches. Thus farmers can cut their nitrogen use back by 50 per cent and use Reefsafe Agrispon at one litre per hectare and still get the same result as they are getting with conventional fertilisers,’’ Mr Doyle said.

“That’s good news for the environment and represents dollar savings for farmers.

The trials proved that farmers could cut back urea application by 50 per cent, and yet still obtain same yield, CCS and stick count. Plus the trials showed superior shoot emergence in the Reefsafe Agrispon treated plots and a similar root development across all of the assessed plots. Results were better nutrient usage, improved soil texture and less compaction, improved root, plant and growth performance. This result achieved by applying one litre of Reefsafe Agrispon per hectare - repeated in 45 to 60 days.

Bundaberg farmer Tony Chapman allowed his farm to be used in the Reefsafe Guano trials. Half-an-acre of a 12-acre cane field was used for the trial.

Two treatments (Reefsafe Guano and conventional fertiliser) were used side by side – three rows by three rows. This process was repeated 12 times, so there were 24 x 3 rows in the trial.

“Everything was replicated - tonnage, CCS - and at the end of the trial we could conclusively conclude that no one fertiliser was superior to the other,’’ Mr Doyle said. “The farmer was no worse off financially or yield-wise, and yet the organic fertiliser more greatly benefited the environment.”

The trials proved that Reefsafe Guano provided high amounts of available phosphorus, calcium and silica. Reefsafe was a very well suited fertiliser for problematic areas where leaching of phosphorus was an issue. The trials also proved that silica plays a major role in increasing the cell strength of plant tissue, and thus the rigidity of the plant.

Shoots from sugar cane fertilised with Guano in the trial at Bundaberg.

Mr Chapman said he was not familiar with the Reefsafe Guano product when the trials were held, but now believes we must become more aware of what we are putting into our soils.

“Visually, you couldn’t see any difference between the trial crops. It showed there was a benefit in using the organic fertiliser because it reduced the amount of heavy metals being put into the soil to very little or nil,’’ Mr Chapman said.

The trials have been enthusiastically supported by the senior agronomist for Suncorp, Robert Drewitt.

Suncorp is the biggest financial backer of the Queensland sugar industry and plays a vital role in the industry’s future. Some 20 percent of the area under cane in Queensland is owned by farmers who are Suncorp clients.

“This is the sort of research that needs to be done to offer proven results to the cane industry to reduce their costs and reduce chemical inputs into the environment,’’ Mr Drewitt said.

P&H Rural’s Craig Baker said the trial saw no improvement in either crop.

“There was no extra yield and the quality of the sweet potatoes were no different,’’ he said.

“The surprising thing, though, was that when we dug the sweet potatoes from the Reefsafe Agrispon rows, we found that the soil had a lot finer silt quality compared to the other conventional fertiliser rows.

“This was a big advantage because when using the digger to remove the tubers, they were removed more easily and there was less damage to the tuber than those in the harder soils,’’ he said.

Similar, but unreplicated, trials have been hosted by Elders Mackay in the past three years. Most of the trials have been conducted on sugar cane crops, but maize and smaller crops such as soybean and grass pastures have also been trialled.

Elders senior agronomist Noel James and field officer Joe Bartolo said the trials, while not published, did demonstrate that Reefsafe Guano and Reefsafe Guano blends did “stand up well against conventional grower methods with no loss of yield or CCS in the sugar cane.

“We also noted a higher rate of residue phosphorus and silica in the soil. The trials also demonstrated the product’s versatility - it blended easily with other nutrients and could be applied quite easily using conventional farm machinery,’’ they said.

The trials with the liquid Reefsafe Agrispon were conducted on sugar cane, maize and soybeans.

“The trials demonstrated that the product was equally as good, if not better than, conventional fertilisers,’’ they said.

“We noticed that the trial plants showed a tendency for the plant to put down a more substantial root base - thus were healthier to take up more nutrients.’’

Mr James said the farmers in the Mackay region were under immense pressure, particularly from the media, to reduce the run-off to the inner-reefs of the Great Barrier Reef region.

“We are more aware now that we have to re-consider conventional fertiliser products and become more educated in the use of organic products such as the Reefsafe products,’’ he said.

Mr James said the Reefsafe products had also secured markets in the region’s Central Highlands where sorghum growers had been working well with the products for the past two summer seasons.