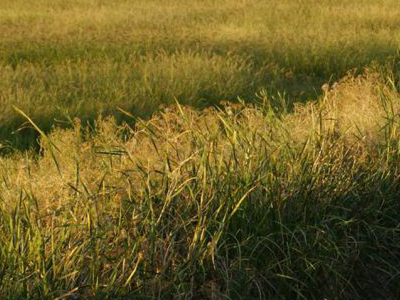 The company, who turnover 58 billion Yen or some AUD700 million per year, were keen to increase the planting of the very popular new sticky gourmet Japanese rice variety called Koshihikari.

Although conventional plantings of this variety have also been grown for Mitsuhassi, much of this grain has been aside for seed build up. Mr Randall was approached as a specialist organic grower capable of producing this very popular variety specifically for the niche organic rice market.

The site selected for the rice production was that of a 3-year pasture based on Trikkala and Woogenellup sub clovers. This pasture had been top dressed with GUANO GOLD at 125kg per hectare during the winter of 1987. The clover pasture was vigorous and healthy and had obviously improved soil fertility.

The Koshihikari rice was direct drilled into the 22 hectare grazed paddock at a rate of 350kg per hectare, no cultivation was used or chemical applied. The rice was flash irrigated to trigger germination and flooded after 8-10 days. The crop grew vigorously and displayed a good colour through the growing season.

The rice had created such interest in Japan that the president of Mitsuhassi visited specifically to inspect the progress of the crop. When harvested in late March of 1988, it had produced the exceptional yield of 2-3 tonnes per acre, (5.75 tonnes per hectare). A crop of 7.5 tonnes per hectare is considered very good for this variety when grown conventionally, therefore the organic rice crop grown by Mr Randall produced very effective results.

Furthermore, the 100% premium price applied to this organic grown variety saw Mr Randall sell the entire crop for $460.00 per tonne. This was an excellent return as gross margins were achieved per hectare - taking into account that no other treatments were applied apart from the initial dose of GUANO GOLD.

Mr Randall stated “while all of the rice was exported to Japan, there had been demand for some 2000 tonnes had it been available. The value added and packaged rice is to be placed in supermarkets in Japan where it will sell for as much as $30.00 per 1kg pack. Considering the population of Japan at some 150,000,000 people and the popularity of this variety, the outlet for organic rice is exceptional. It is understandable that organic produce generally is increasing at a rate of 20-30% per year.”