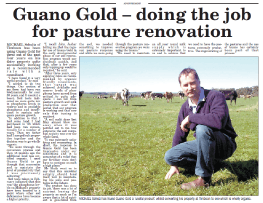 “I have found Guano Gold a very useful product, I needed to do two things..." Michael Schulz

MICHAEL Schulz of Timboon has been using Guano Gold® for three out of the past four years on his dairy property quite successfully working at a recommended rate with a consultant.

“I have found it a very useful product,” he said “I needed to do two things. One section of my farm had been run biodynamically for over 30 years and it needed a boost. Soil tests indicated we were quite low in phosphorus levels in reserve and in available phosphorus and insufficient to sustain adequate pasture growth. “In addition to that I had some land I had purchased in ‘88 which had been run conventionally for a number of years. Then my father and I merged our proper- ties together and the decision was to go wholly organic.

“We went through the conversion process and then 18 months ago the additional land was certified organic. I used Guano Gold® to go through that conversion and to maintain the level of productivity that I was previously achieving.”

Soil tests taken in February indicated that this year the phosphorus levels on Michael’s property have been boosted to a point where other soil deficiencies have become a higher priority.

“I recall John Jashar telling me that the regular use of Guano Gold® in the early developmental phase of our soil renovation program would pay dividends quickly, and that, after a few years only topping up would be required,” he said.

“After three years, only applying rates as recommended by organic friendly consultants, that target was achieved. Available and reserve levels of phosphorus have moved from critical to quite adequate. I can tell from pasture growth and milk production over that period that our program is working and that now, only fine tuning is required.

“A soil audit done last May almost blew me away when it was pointed out to me how extensive the soil microbial activity was over the whole farm.

“It was extremely satisfying and reassuring. In short, the response to Guano Gold has been impressive under our conditions and it is somewhat of a relief that our fertiliser costs don’t have to continue on such a high plane.”

Mr Schulz went on to say that this microbial activity should lend itself well to maintaining his soils and pastures in the future.

“The product has done its job, there was a lot of nutrient leaving the property as much as I’m aware that a lot of nutrient is generated from the soil, we needed something to improve our pasture response and while we were going through the pasture renovation program we were using the Guano Gold-Kwik Start®.”

“We need to maintain an all year-round milk supply which is extremely important to us and to achieve that, we need to have the pastures extremely productive. The regenerating of the pastures and the use of Guano Gold® has certainly been part of that process.”